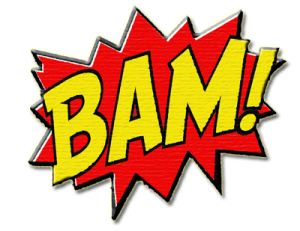 Running out of time, money or motivation are the main reasons for not delivering. In this post I will show you a method to make sure that doesn’t happen to you.

Would you say tying your shoelaces is difficult? A formidable craft? I hope not. It is not like we see someone on the street and admire his ability to tie his laces. “Nice bunny ears you’ve going on. Kudos!”

If we had to wear laced shoes every day, even if no one ever taught us how, I guess, we would come up with a method to get our laces tied and un-tied easily pretty soon.

The method this post is dedicated to is in its way similar. Almost embarrassingly simple, often a mere consequence of experience. But crucial if you want to always deliver, because you will always know where you are going.

I am all about the big picture, so forget all the nifty productivity tools and time management hacks for a moment. If you want to deliver then this one comes first. The best part is, I am a 100% sure you’ve used this method already. But here it is about doing it consciously and intentionally.

The key word is Parallel Progression.

You have probably never heard the term, that is because it is not commonly used for project management. But I am sure you’ve seen the principle. The opposite is serial progression.

To give you a rough idea of the basic differences, take the loading of baseline and progressive JPEGS into your web browser. The baseline JPEG represents the serial progression.

As you can see the baseline Jpeg is loaded line by line so that it takes you a while before you can see what the image shows. Parallel progression is represented by the progressive JPEG.

In this case you are able to recognize the image from a much earlier percentage as it starts with a lower resolution and gets more refined over time.

Simply put, parallel progression will lead to a complete, albeit imperfect, result sooner than serial progression.

But how is this any useful in real life?

Imagine, you are at home on a Sunday afternoon. You are watching TV and life is good, until you get a phone call. It’s your parents-in-law who finally decided to visit you since you moved. There is just one tiny problem: They are already at the airport, about 35 minutes away!

At this point all you may do is lean back and take another sip of coffee. Or this could be the start of a mad scramble if your home is not in the best shape for expecting visitors. I would be surprised if you never found yourself in a similar situation (Tweet here to let me know in either case).

So you probably want to clean your rooms pretty fast. It seems appropriate to go from superficial to more thorough cleaning, roughly like this:

The question is, do you go room by room or task by task?

In this example, serial progression means going room by room: Starting for example with the living room, complete steps 1,2 and 3 and then move over to the kitchen and so on.
Consequently, parallel progression means you clear all horizontal surfaces in all rooms first and then vacuum all floors of all rooms before you’ll start to dust.

Of course I don’t want to talk about cleaning methods. Over the last few years I kept noticing how successful people approach their projects (aka any venture) differently. But it took me quite some time to pinpoint to what the main difference really is and how much it is applicable to everything we do.

If you see a project as a series of several modules. Each module can contain different tasks, then it seems natural to complete module after module. Particularly if you don’t have much experience this seems a reasonable way to go. (If you want to be an author for example it seems reasonable to write a book first and worry about the rest later).

The idea of starting with all of the modules at the same time often seems overwhelming and unreasonable. You may think it is even impossible when one module builds on the other.

I am not sure how you plan your vacations. My vacations, I have to admit, are usually not very planned. Most of the time we realize we need a break and then everything happens pretty quickly. But for the sake of a simple example, let’s pretend it is realistic to plan our vacations as follows:

You can see how these modules all base on each other and thus are more like phases, in which case it seems impossible to apply parallel progression to such a project. However, an experienced traveler may already have the cost of activities for possible destinations in mind, when comparing them. She may already know that she needs costly vaccinations for certain times of the year and therefore could save a lot of money for other times. Which again has a directly influence on ideal times for visiting such regions.

When the type of project is new to you, you will likely not start thinking much about the next phase before you completed the first one. However, when you are experienced you may already consider all phases and consider how you could react from the very beginning. With enough experience is is natural to be aware of other phases ahead of time.

But to be clear, parallel progressing means doing not only thinking:

Probably at least half of you get goose bumps just by reading the headline – I promise I’ll make it short and simple. Trying hard not to drift into total geekery…

The picture shows the flow of a typical research project (e.g. natural sciences, social psychology). Each of these modules (here phases) contains one or several tasks and each phase depends on the completion of the previous one.

Of course these projects have fixed budgets and time frames (which is good!).

I couldn’t agree more, although I see the underwhelming coolness as a direct consequence of underestimating time and costs. Anyway, regardless of how you tackle a project, there is always something that can and will go wrong. Trust me on this.

For the purpose of simple math, let’s assume you have one year for completion and each of these six modules is estimated to take two months. In reality, however, these take 17% longer than planned, which is in total little bit more than two months longer. This means if you did everything in series you would not be able to even start writing a publication before the official end of the project. The big problem is, without publication it is basically like the entire study never happened. No one will get to know of it.

When progressing in series you’ll be aware at some point that a previous module and possibly the block you are currently working on take longer than expected, but very likely you assume you’ll be able to complete the other modules faster than planned, possibly by cutting down on the quality.

Progressing in parallel may be more challenging in terms of time tracking, but you’ll be able to realize much sooner and across all blocks, when and where things are not as easy as planned. You would also notice when some activities are simpler than planned. Thus, you are more likely able to counteract and reschedule ahead of time.

There is of course more to it. Let’s say a publisher has very tight requirements for how a study has to look like to get published by them. The sooner you figure that out, the easier it will be to modify the study accordingly and thus save a lot of time arguing later. Based on your study design you’ll know pretty soon how your data may look like; you could create a fake dataset and consider what type of calculations to perform, even involve a statistician way ahead of time.

Additionally, the sooner information is summarized in writing the less likely it is that results get lost or mixed up.

In summary, it comes down to these differences between how we mostly tackle bigger projects (in series) and how we should operate (parallel progression):

Characteristics of Serial Progression (one module/phase at a time):

Characteristics of Parallel Progression (all modules/phases at the same time):

I mentioned the minimum viable product (MVP) in the list above. The term was coined by Frank Robinson and popularized by Eric Ries for web applications (The Lean Startup). Basically, it means that you let a subset of customers test an early prototype of a product and use their feedback to refine it. The conventional method would be refining it in-house and thus potentially risking missing the market’s demand after spending more time and resources. You can see how the conventional method represents serial progression (product development then release to the market) vs. the parallel progression of the MVP strategy (product development and market release at the same time).

As always, if you have questions please leave a comment or contact me. I am always happy to help.
[ois skin=”subscribe 2 no AL”]