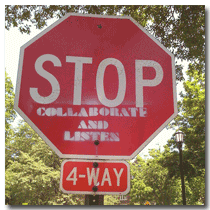 What would you do if somebody gave you 100 hours? I don’t mean 100 hours of some membership or rollover minutes in your mobile phone plan. I mean if you had 100 hours that you could spend any way you want. As if somebody bought you out of your usual obligations. For all the 9 to 5ers among us that could be two and a half weeks not spent in the office or your car or meeting clients. But I am not talking about vacation. That would be too easy.

What would you do if you suddenly had 100 hours to spend on whatever you want in your everyday life?

I realized last week that this is the case for me right now. I suddenly have a couple of hours every day when I am free to do what I want. And, to be honest, I am already about 20 hours in and have to admit that this is more difficult than I thought.  As so often I greatly overestimated my energy and underestimated the time it takes to do stuff, especially after work. I have just moved and a lot of things I promised to do had to be postponed for after the move. And now I suddenly have more time than I thought. No excuses for me.

Anyway, as I found myself last weekend with the perspective to have so much time at my hand, I was wondering what others would do with the time. Of course, I asked my friend Google “How would you spend 100 hours”:

Darrin Clement from The Goal Triangle suggests to focus on goals for these three areas of our lives, family, fitness, and finances and then use 100 hours to accomplish these goals. In case you didn’t know successful people have 100 hours per week to do stuff.

If you don’t care as much about achieving ambitious goals you can certainly spend all of your 100 hours playing immersive video games or learn to speak another language in 100 hours. You can mediate through these 100 hours – I hope not in one go – and learn six things about yourself.

And now I also know what Vanilla Ice is doing with his time:

Vanilla Ice has accepted a plea deal after his burglary arrest and will serve 100 hours of community service: http://t.co/hskAKGaha7

I really hope you are in a better place. And because I know that often when we are allowing ourselves to think about what we’d do if, we are often suddenly able to get rid of the if.
So, what are you doing with your 100 hours?