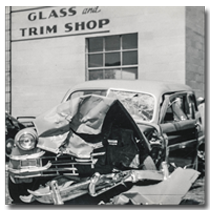 This week I blatantly ignored one important lesson I had learned years ago: “When your car is making funky noises, you’d better take care of it. It ain’t get better.”

Following this rule would have saved me some headaches back then. Driving old cars has taught me that when you think something is wrong you’d better check. But it’s also a rule that applies to pretty much everything in life. It doesn’t mean to obsess over everything, but things rarely run smooth forever. Acting on a first hunch may be the best chance to avoid worse.

If you have the feeling you are spending too much then it might just be true. Regular checks and alarms are great to avoid the build up of a big surprise. Programs like Mint, CreditKarma, or Quizzle help you by monitoring your spending and sending you alarms when something occurs beyond the ordinary. These also help you to see where you could save money (Whaaat? I spend how much on gas?!).

We should bring our cars to regular check-ups. But isn’t it curious that we often care more about our cars than ourselves? When did you have your last checkup?

Anyway, this week none of these came to punish my ignorance. A couple of days ago I completed some theme and plugin updates on this site. I wasn’t so sure about the theme update to begin with. But do you know when you practically know you shouldn’t be doing something and end up doing it anyway?

Does this ham smell funny? It even got this slimy layer…

So I completed the update and checked the site on my computer. Everything looked fine on Firefox, Chrome, Safari, Internet Explorer, and Opera on my laptop and my phone. However, a few hours later I logged in at another computer and as I accidentally opened the Alt-code site out of habit, I closed it immediately, but got a glimpse of a seriously messed up layout. Of course I was worried, but after checking my phone again I concluded it may have just been a glitch on this one computer. Well, I should better have checked. What I had forgotten was that Cloudflare was still sending the old and not yet broken version of Darn Office to my browsers. I should have known better.

I don’t know for how long the site was broken and whether other browsers than the Internet Explorer were affected, but thanks to a video I received from UserTesting (Peek) that I couldn’t ignore. I finally fixed the problem again yesterday. My apologies to everyone who landed on the messed up site.

For websites I can only recommend to use tools like Pingdom (to monitor uptime and speed), Google Webmastertools (for crawler and other errors) and Peek, (to have a real person check your site) regularly to be made aware of problems.

For such and all other situations it’s also worth to listen to friends and family. Particularly the smaller, more silent or honest voices are worth taking seriously. (What do you mean the pants are tight? I am not stressed, not AT ALL…)
Make sure to have checks and balances in place to keep you protected from avoidable surprises. It easier to stop and reflect than to return from a dead-end.

This is Quick Tip No 38.
photo credit: simpleinsomnia via photopin cc