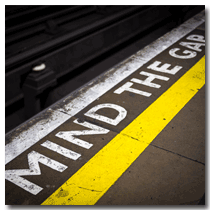 In life there is a gap between the possibilities we have and what we make out of them. In fact, we don’t jump on most good opportunities because we don’t see them. But some of the ones we see, often the ones that get us excited, also scare us. And only few of those exciting and scary opportunities tickle us enough to pursue them regardless of how frightened we are.

I believe that when we look back at our lives we don’t want to have regrets about how little we made out of the possibilities that were given to us. We may make the wrong choices at times, those are just part of life, but I don’t think we want to look back and feel like “life has lived us”, because we were too passive.

Can you remember those situations growing up that scared you, like getting a shot, learning to swim, asking for a date, the first day at a new school? In most cases it seems funny that we were scared. Back then the reason for being frightened was either that we knew something bad, e.g. painful would happen or at least it was possible to end in a painful situation. Those fears haven’t changed a bit, have they?

As a kid, do you think you would have gotten a shot if you had been given the choice? The pain of a shot versus the possibility of getting chicken pox?

Individual risk is a complicated topic.

When you consume pain medication you take it because you think the benefit of reducing your pain outweighs the risk of experiencing one of the many side effects, right?
Because the pain is now and you assume the risk is considerably small enough. However, if the little print lists “in some extremely rare cases: Death”, then you’d probably think twice, wouldn’t you?

A couple of weeks ago I watched an episode of True Blood in which one of the vampires played the “bucket game”, which is nothing else than Russian roulette while standing in a bucket. You know, vampires. While watching it I realized that it didn’t matter what the chances were, it all depended on whether the screenwriters wanted the main character to die or not. Given that it is True Blood in its final season, everything was possible. But she survived to “live” another episode.

And then I thought that for anything we do it doesn’t matter much what the risk is while we are doing it. You throw a coin and it will obviously either be heads or tails. You apply for a job and in a month you’ll either got it or not. Regardless of the chances only one of the two will happen. If you don’t apply the outcome is sure, you don’t get the job. No uncertainty about that.

While hiking in the European Alps I once had to cross a small gap in the massive rock we were walking on. All the guide said “Mind the gap”, it was less than two feet to cross. So it was not a big deal really. It wasn’t until I looked down while crossing it with an easy step that I realized there was an crevasse opening up below me, easily hundred yards deep. It was an easy step at first because I thought it was no big deal. But coming back the same step suddenly had way more weight. The danger was always the same, both ways it would have been impossible to fall down this crevasse. But knowing how deep it was made the difference.

This means there are two parts to perceived risk. One is probability, the chance of failing and the other is the damage or the intensity of failure when it happens.

SO what if we knew that whatever we attempted we will succeed? Wouldn’t we try way more things?

What if you knew the damage in case of failure is negligible? You could easily try over and over again, regardless of likelihood of failure. Right?

This is why thinking about what the worst is that can happen is such a great technique to cross any gap with confidence.

This is Quick Tip No 48. Read all of the other DO Quick Tips here
photo credit: Robert S. Donovan via photopin cc