The Odds Are in Your Favor 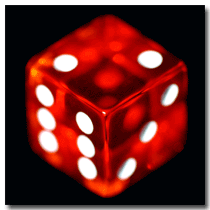 Today something happened that made me quite happy and it has nothing to do with hunger, but a lot with games. Both my favorite teams, USA and Germany, made it through the group stage of the World Cup in Brazil. If every game was a toss of a coin, the odds of one team being among the 16 of 32 teams to advance past the group stage is 50%, the odds that two specific teams make is therefore 25% (0.5 x 0.5 = 0.25). Sounds pretty slim, doesn’t it? But if those two are in the same group (17%) and this group is even called “the Group of Death” then what happened today is quite remarkable or in other words unlikely.

We as a society celebrate the extraordinary. We are delighted by stories of rare luck and love stories about unlikely heroes. It seems we are equipped with a built-in probability calculator that accesses every situation in milliseconds just to tell us whether something is likely or unlikely to happen. I assume this calculator was necessary for our caveman ancestors to be able to make quick life-or-death decisions and it surely helps us in similar situations today.

Even in less serious moments, it feels great to succeed in something that we considered impossible if it’s just something small like hitting a hoop while throwing blindly over one shoulder. In general, however, we miss a lot of those happy moments, because our probability calculator is really weak when we have time to think longer than split seconds. We don’t even try because we think the chances are too slim to succeed.

Here’s an example: What do you think the chances are that among 23 people two celebrate their birthday on the same day? Would you say high or low? 365 days, 30 people?

Very likely the answer to the shared birthday question (>50%) goes against our initial estimate because probability is a tricky thing. While the chance to have a winner at a raffle is 100%, the odds that you win are usually pretty small.
It is the same situation when you hear the birthday question: You instinctively assess what the chances are that someone in a group of 30 people shares the birthday with you (1.32%). I assume it is due to this life-or-death scenario that we a) usually assess likelihood from our point of view and b) only count a single event.

When you play dice, you have the same low chance for each throw to get a six (17%), however, it is actually only a bit less likely to not throw a six in 10 throws (16%). You just have to keep at it.

In other words, if everything you did had only a chance of 10% success, already with 7 attempts, success once is more likely than failure (52%). You surpass 90% probability of success with 22 attempts. This is a lot, but all the math aside it also means that as long as you never give up you’ll succeed eventually.

However, take all this with a grain of salt. While I strongly believe that giving up too soon is the main reason why people don’t achieve what they can, you should assess what it may possibly take to be successful and whether the result justifies the effort before you start. Nothing is ever 100% save, but if you keep making smart decisions, overall you’ll make more good than bad decisions (listen to “Using Expected Value to Make Better Decisions, with Billy Murphy”).

The odds are in your favor if you make them to be.