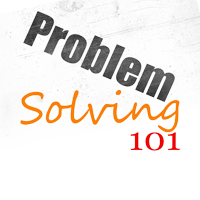 This is lesson four of the my little problem solving course. If you read the last post, you are probably expecting me to continue with further methods of idea creation. But more about these at another time. Let me explain you why. I am a fan of parallel progression, which means I don’t think a project or topic (in this case) has to be tackled at the beginning and worked through in full detail from the beginning to the end. I rather suggest to start working on all phases at the same time as much as possible.

Hence, I will give you a rough, nonetheless whole picture from the very beginning and refine it over time. This way you immediately see where I am going and you know at all times where we are at. You should also be able to apply what you read immediately since you know the big picture (see graphic below). The drawback of this method is of course that I have to promise you further details for a specific module until later.

Today’s lesson is about executing your solution. 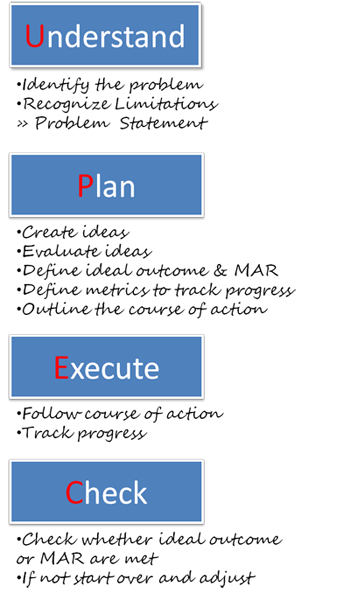 Why was Nike’s “Just do it!”-campaign so successful? Because “Just do it” stands for overcoming the inhibition, for getting the ball rolling, for the first step in the right direction. Just doing it, means to finally start achieving our dreams. Well, that were the images that the smart commercials triggered in us. Action is good. Plans and dreams are accomplished only through action.

However, there is one thing that is equally important as the execution of your plans, especially when things are more complicated than eating pancakes. This is measuring whether you are on the right track.

Talking about sports, the number of scores you make don’t count if it is for the wrong team. When solving complex problems you need to make sure you a) get the result you intended and b) don’t create unintended new problems.

I don’t want to get overly political, but I am sure you can think of at least one government measure that either failed to achieve the intended effect or created new unintended problems. I am very confident you can find of at least one regardless of where you live.

For this lesson I want to show you a few examples of situations where tracking the right metrics makes a big difference.

When trying to solve extremely complex problems like improving the lives of the poorest people around the globe, accurate measurements can change everything. The Bill and Melinda Gates Foundation has made an incredible impact by requiring and supporting the extra effort needed to track the effects of interventions all over the world. I’ve been lucky to have been part of a project funded by the Bill and Melinda Gates Foundation for the last two years. Not only for this reason I can only recommend to read Bill Gate’s annual letter and watch this video (River of Myths) to understand the power of measurement. You can only know that what you are doing is right when you keep track of the effect.

I admit this is a big jump back to a much smaller problem. But this is a great example of why tracking the right metrics is important to make sure you don’t create new problems. Pat Flynn from the widely successful Smart Passive Income Blog wanted to make his site more user-friendly and organized. As he describes it “The site … became this Frankenstein concoction of things that I liked over time, … and it was leaving new visitors overwhelmed and confused.”

He wanted to make it easier for everyone to navigate through his site. Basically there are two main purposes of a good design: Convenience and Function.
I could go on about design forever, but to make it brief: From a user perspective using something has to feel good because it is obvious and easy to use and from a business site the design has to make the user do what you want.

The story for me is not how he the redesign process happened or what elements have changed, but what Pat did after the new design went live. He did not only rely on what people where saying about the new design or whether his overall traffic numbers changed, he looked at what people were doing on his site. Pat checked where visitors clicked and how they interacted with his new design, he also checked in detail whether other aspects of his brand were affected and then reacted accordingly.
Only by tracking the metrics representing the two above described purposes of a design which were a) the locations where his visitors clicked and b) if they landed at the right spots and did what he wanted them to do (subscribe, download the Podcast, etc) Pat made sure the redesign solved the problem exactly as intended.

I hope you don’t get the feeling I am against electric cars, because this is the second time I mention it here on Darn Office. But I think the electric car is an excellent example of why it is important to consider the big picture and measure all involved metrics. If you look only at emissions at the point of use then it is the perfect solution to transporting people with the least environmental impact. If you however measure impact of disposal, production or the generation of electrical power then the story may be different.

I bring this up, because struggling with emails seems to be one unifying problems of the modern world. So no surprise when handling email is a recurring theme of productivity blogs or books. For the moment I think I solved it. What do you think is the parameter I am tracking to come to this conclusion?
I could count the number of emails I am reading per day and I am sure you can see what is wrong with that. Well, if I get more emails every day and still read only 50% of them, I’d still have a problem.
Tracking the percentage of read emails in my inbox also doesn’t tell me at all whether I have a grasp of my emails or not. I could be reading every single email I get per day, thanks to smart phones that is what most of us do – and still struggle, because I don’t manage to respond to all of them.
Ok, then maybe track the number or better the percentage of emails in my inbox I reply to. This doesn’t make any sense either because not all emails require an immediate response.
Counting the hours spent on addressing emails makes sense if we add another condition. I turned it around a bit.

It is obvious, would I only try to achieve zero inbox without looking at the time I could easily create more problems by neglecting other tasks.

This one is short today: “Do it and measure what you do”

So far these posts are part of the Problem Solving 101 course: