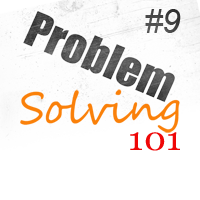 Last lesson I suggested being open to test out various life situations whenever we have several possible solutions. If you start thinking about it, the possibilities are almost endless. Testing is how I found a solution for how to politely deal with those self absorbed talkers you’ll meet now and then e.g. at conferences.

We don’t get many things done, despite their importance, because the little voice inside of our heads finds “good” reasons against them. Asking for favors is such an example. I absolutely hate asking for favors. A couple of years ago I needed at least five recommendation letters from people who I haven’t worked with. Asking people you know for a favor is one thing but asking absolute strangers to write something positive about you is a total different ballgame.

Since you can ask everyone only once there seems to be zero room for experiments.

Of course, I don’t want to ignore the obvious solution, which would be asking someone who had already done it for how they did it. My experience, however, is that while it is of course nice to get some outside input, situations are often so different that the exact same approach doesn’t work. After all, you want to use your own voice and style.

Let’s assume you could turn back time after each try. What would you test? Think about when someone asks you a favor, what determines whether you say yes or no?

There are pretty much only three main factors:

These are the three factors you can aim at. If somebody doesn’t know you, you can certainly influence them positively through what you write. You may also come up with incentives or point out benefits of helping you. But the last one is an absolute must: Make helping you as easy as possible.

Now you know what matters, but you still haven’t solved the problem of having only one shot.

In my case, I had two specific recommendation letters I simply needed to get (at least that was what thought). I made a list with people whom I thought knew me well enough to be possible candidates for asking. From these, I needed about 30% success rate. While jotting down the list I also realized there was a bunch of people who’s names I knew, but couldn’t tell if I ever directly interacted with them. They couldn’t probably either. These were my test candidates.

I selected those who have attended a conference two years prior (I had a list of attendees), so I could use the same introduction for all of them. Calling turned out to be pretty ineffective, because even when I made it past the voice mail ping-pong, I could quickly tell that calling rather decreased my chances. I had to follow up with an email anyway, and since they neither knew me really well, and there wasn’t so much to gain for them, it came basically down to the effort they had to put into. Everybody is busy. On a phone call, it is just too easy to express that, while you as the caller have not much to put against that argument.

It turned out;  email was most effective with an already drafted letter template attached to it**. I even had their personal bio section completed which took me quite some effort to research. Interestingly, no one just took my template. Everyone who sent the letter back to me made changes. That it worked is no surprise, because it is obviously much easier to revise a text than to come up with the wording.

Looking back, it seems so obvious that attaching templates would yield the best results. But at that time I thought it was disrespectful to tell these experts what to write. After all, I wrote how impressed they have been with me. But since they could change what I wrote, the convenience was what counted. It almost didn’t matter how much effort I put into the email itself. So not only did I already receive a couple of good recommendation letters from sources I never expected, I also got the letters I wanted pretty easily. One person even took two hours of his time to explain to me personally how I could improve my letter with important key phrases that weren’t in my template.

Rejection always feels like a personal defeat. That is why it probably never gets easy to get rejected. But if you see a failure as the normal, expected outcome, then you can only win. And most likely you won’t really have to ask random people to play soccer in their backyard.

Great tests are split tests for websites. You can only win because winning and losing happens simultaneously. You’ll end up with a better performing, sales page, opt-in-box, homepage, etc.

This means when you allow failure to becomes one acceptable outcome.

The Post-it is not only a famous story of a successfully re-purposed adhesive that was too weak. It is also the story of a failed idea. The inventor Art Fry combined the weak adhesive with a piece of paper to create a reusable bookmark. When he handed these bookmarks to his colleagues for testing, the feedback was not too positive. It was not before these bookmarks were used to write on them, for example, to add comments to printed reports without writing in the text, that their potential became obvious.

Dealing with the Logistics

The more systematically the testing is done, the less effort it takes. Thomas Edison’s great achievement was providing the logistics for running so many tests.

When I tried to find out what strategy works best to lower my cable/internet bill, I had the choice to spent hours on the phone or in the support chat. The advantage of the chat is that I get to keep the transcript, the disadvantage is that they keep it, too. However, the support people usually only looked at previous chats when I mentioned them. Since it was easier for me to remember what was discussed I went with the chat. I now realize that programs like Text Expander or PhraseExpander could have helped me massively. The support people use such programs obviously.

Anyway, I scripted what I would write and simply copy-pasted these phrases, while I was doing other, simple tasks on my computer. It took me a couple of failed attempts, and I admit it was finally my wife who managed to lower the cable bill. Over the last five years, we have saved an estimated total of $2,400 on our cable bills this way. I guess that is a nice reimbursement for the hours spent.

Not every “failure” is really one. If you knew how to get the perfect outcome, you wouldn’t have to test in the first place. The real failure would be not doing anything at all.
Playing the Failure Game means getting it right eventually. Find the main factors that have an likely impact, set up a system that allows you to get it done, and then put in the hard work to enjoy the benefits.