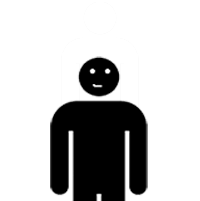 Positivity is not like a shirt, which used to be hip in the 90’s and is now nothing more than a faded trend of the past. It’s a known mental hack and also, I am afraid, so overused that it probably leaves a stale taste in your mouth. Figuratively speaking of course. Don’t lick the screen!

But with all due seriousness, positivity is simply a state of mind, which when you are in it, makes your life much easier. It doesn’t mean you have to endure everything in life with a dimwitted smile. As I wrote before, “being positive includes how you start your day, how you react to changes, and what you draw out of anything that has happened”. In “be positive” I called it an action attitude, because a positive attitude makes it easier to initiate action.

However positivity also matters in how we treat ourselves and others. We are social animals and as such we are primed to interact with other people. Yet, we are often limited by our own believes and assumptions.
We often think and talk about ourselves as well as others negatively, without even realizing, what the effect is.

Just think about the daily commute. Aren’t all other drivers just idiots? I mean, why does everybody, who doesn’t even know how to operate a tricycle, have to be on the road while I am? Seriously!?
My daily commute was stressful, until I started to listen to podcasts. I had no longer time to complain about the other drivers. As a result, I am a much more relaxed and less aggressive driver even when I don’t listen to anything. I no longer expect anyone to make the next driving mistake and, as a result, I no longer freak out if one happens.

And there is us. We sometimes like to put ourselves down, it may just be a joke, but if you think of it, that is the stuff we believe. Do you think you can become a better tennis player by telling yourself that it is just not your sport? Or that you’ll enjoy doing your budget by telling everybody how much you don’t like math? Or that you’ll be done early by labeling yourself as “procrastinator”? Yes, I won’t enjoy meetings as long as I tell everybody how much waste of time they are. Well, most actually are…

Anyway, it is the same with negative talk about other people. There is simply no point unless you talk to them directly. Talking behind their back won’t make them change their behavior. In contrast, it only reinforces your expectation of them repeating the very behavior you were complaining about. Complaining and negative expectations only lead to inactivity. Find things you like, about yourself, others and the day ahead of you and expect to have a much better time.