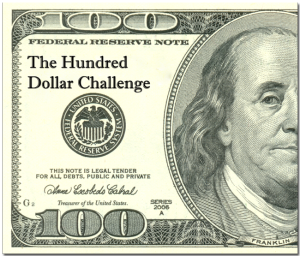 Fiverr is a website where people offer all sorts of services for five dollars. Here are some examples:

There are also many funny and bizarre offers (I will go Insane over anything you want for $5). Sign-up and posting an offer – Fiverr calls these Gigs – is very quick and simple. All you need is an idea of what you are willing to do for $5 dollars and a Paypal account to receive the money you earned. But be aware Fiverr keeps one dollar of each five dollars you earn.  That is 20%, and I think pretty stiff, but well nobody forces you to do it. To be honest I only noticed that after the first buyer bought my gig and I received my four dollar share.

Setting up the profile took less than one minute. There is not much to enter, a name, email, and Paypal account. I skipped photo and bio and was done.

Well, that was not an easy one. Scrolling through the offered gigs I noticed basically two tendencies: People offered to do either relatively time intensive ‘anonymous’ tasks or task in which they would appear in a photo, video or do at least a voice-over, so in short tasks for which they invested much less time, but gave away any control of what happens with the material they are now a part of. Voice-over appears to me one of the smartest gigs because, to record a five minute message takes, well, exactly five minutes, with a few minutes added for finalizing the task that looks like $5, err $4 Dollars earned in less then 10 minutes. Especially when using another voice, you couldn’t care less what happens with the material, because no one will recognize you.

Sadly, lacking good recording software, or the skill to do an impressive voice-over, this gig was not an option for me. For most of the other tasks the competition was just too big (writing content), it was not up my alley (music gigs, crafts), way too time intensive (virtual assistant, Photoshop work), not feasible (writing text in the beach sand), or simply not fun enough (data entry, hula hoop in a bikini). What sounds like a complex assessment took me about one minute to decide. Being a native German speaker I thought it is easy to offer English to German translation.

For the details I checked the competition, and decided to offer more in less time to stand out. So I offered to translate 500 words in one day, edited a picture of a map with German speaking countries (Germany, Austria and Switzerland), and posted a brief description mentioning I have written several paper publications in both languages, which is true. At that moment I had overlooked a few tiny details, but more about them later. It took about half an hour total and my gig was up.

I posted my gig on March 1, and basically forgot it for one month until April 1. That was when I received an email informing me someone had bought my gig! The buyer had bought three gigs at once for a text of 1500 words. It was a sales text about furniture and the timing was perfect, because I had time in the evening to get started with it. Although the article was fairly easy to translate I wanted to do a good job for my first gig. A bad review would have ended this experiment right on the spot. So I researched several German Furniture sites to match their language and ended up spending 2.5 hours for this task. That was also when I learned that this time investment had not earned me $15 dollars but $12.  I received a good review and felt good for the moment despite the low hourly rate.

It was not until April 17th when I received my second order. It was one single order, the text a simple motivational blog post as it seemed, and could deliver it within few hours after spending about 45 minutes on the translation. I received a good review, but also a personal message letting me know that my translation contained some typos and punctuation errors. I checked it and had to agree. I had not realized that it was years since the last time I had written anything other than postcards and personal messages in German. I do not have the German spell check installed in my word and a couple of grammar and spelling rules have changed since I am out of school.

Despite the justified critique the buyer ordered six more (3000 words!) gigs the same night. Seeing Fiverr automatically updating the possible revenue was quite motivating, but I was freaking out! I had only 24 hours to complete the gig and knew I would not have time during the day. This meant I had to stay up late. My first task was to catch up with the current punctuation and spelling rules. The piece was a long article with motivational tips, and although there was some repetition which saved time it was overall not an easy translation. The English was not very good. My new strategy was to translate everything first, then adjust the language to make it a readable text, and finally check it a last time for errors. It took me a total of 7 hours! A good part can be attributed to efficiency loss because of sleep deprivation. The translations were ordered as six single gigs and I could not deliver the sixth within the promised time. If you fail to deliver in time the buyer has the right to cancel and receive his money back. At this point I was sure I should stop with the experiment.

But when the good reviews came in and all six orders were marked completed, I got upgraded to Level 1 Seller in Fiverr. With a total of now $40 it didn’t look too bad after a good nights rest. Level one allows me to add extras to my gig for an extra payment, but I had no idea what to add. I was already extra fast (one day) and more words could be added via buying more gigs. The next week this same buyer ordered another gig for 1000 words (1.5 h) and so my Fiverr activity had earned me $48  in April:

In May things went much better. A business trip end of April forced me to extend the delivery time to one week. When I got back I only reduced it to three days. Which allowed me to allocate a block of time every three days, that I could use for translations if I had gigs to deliver. After all many potential buyers are 9 hours ahead of me and lose a lot of time before I even got the chance to react when they place an order during their morning in the middle of my night.

I got a new regular customer (Buyer 3) who ordered a couple of gigs each week to translate the FAQ section for a program. Most of the questions and answers I needed to translate were very similar. The software itself is not localized and so about one third of the text remained in English. After two gigs I basically knew the program which made the the translation much easier. By average it took me 30 minutes per 500 words. 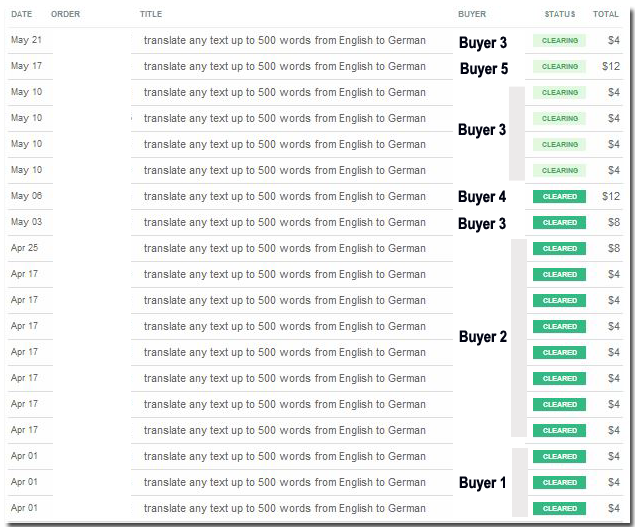 Buyer 4  wanted a translation of 1500 words for another furniture related sales article, which I completed in 2 hours. At last a translation for Buyer 5 for the description of an iPhone app, which was interesting and fun to do. These 1500 words took me 1.5 hours.

What I liked about Fiverr

It is also about evaluating how much your time is worth and what can you offer that would pay you more in less time. Competition is also a factor. I did absolutely nothing to promote my gig. Interestingly, according to the stats my gig was viewed only 2 times, but had 5 buyers. So I guess the Fiverr stats are not the most accurate, because the earned amount on the stats section also deviates from the actual earned amount. The frequency the orders came in was just right for me. More would have been really difficult to accommodate. I did not force anything and so it is no wonder that it took me 82 days in to earn $100.

Are there ways to improve? In general, if you have more time you can offer multiple different gigs to address different customer types. Or you invest more time or money beforehand, e.g. for promoting the gig,  writing or buying some kind of program that can do the gig for you, etc. In my specific case with the many good reviews as reference I could lower the number of translated words to increase my hourly earnings.

This specific gig had a nice extra benefit for me: It reconnected me with my native language by forcing me to get up to date with grammar and spelling rules. And I am also sure I’ll find a way to spend the hundred dollars. As final note I am happy I did it.