The Power of Don’t 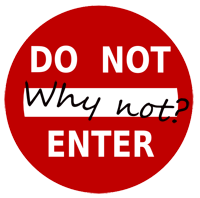 If you are currently spending your time on a deserted Island and you found a hard copy of this post attached to a hidden immunity idol, then read on. It may help you with the other guys. Well, and if you don’t know what I am talking about then you’ve just been part of very ineffective communication.

More than anything when we communicate we want our message to be understood. Our body language and the way, how we say what we say can support our message and influence the degree of understanding. We don’t want to send mixed signals. Saying “Oh, yes you’ve got my full attention” while checking the latest tweets on your cell phone obviously doesn’t fly.

These signals aside, the most important signals are the words we speak and write. Effective communication is short and clear. However, if you want to complicate your life then use ‘don’t‘ as much as possible.

Using ‘don’t’ creates attention, but unfortunately to the wrong message.

Tell a two-year-old not to pay attention to the needle right before getting a shot and you can bet what she is going to freak out about.

And by the way, don’t focus on the humming sound of your computer fan.

“Darling, I have to tell you something, but don’t be mad” will only prepare your darling to hear something really maddening.

“Don’t don’t vote me off because you think I am a threat”. May just give your Survivor colleagues give the wrong idea.

During a presentation, you move to the next slide and say “Don’t look at the graphic yet, it will only confuse you.” only to look into many wondering faces.

Obviously saying “don’t” only puts attention to the very thing you want to see ignored. So far, so clear. If you are worried about your two-year-old touching the flame, move the candle away. If you don’t want someone to look at something remove it from sight. If you have a nasty zit, say “Don’t look at it” and you know what happens: *Awkward eyeballing*.

Unfortunately, the effect of ‘don’t’ goes beyond this immediate reaction. For example, when we are in a situation where we have to memorize a lot of facts in a short amount of time, we will more likely remember the facts that come with ‘don’ts’.

“Turn left after you cross the train tracks, then go straight until you see a red brick building, then turn right into the second street and drive a couple of miles. When you see the fire station don’t turn left, keep going,etc….”

In many cases, your friends will either end up on the left side of the fire station or recall that they shouldn’t turn left but are at a loss about what else to do.

If the description is good and clear, then the action you are trying to avoid might not even be an option.

But the really sneaky part about ‘don’t’ is that you cannot even trust yourself. James A.K. Erskine summarizes in his research report that “… suppression of chocolate thoughts can lead one to act in the very way one was trying to avoid and consume more chocolate.”

By suppressing a thought or a feeling you may actually act exactly the other way as soon as you stop suppressing this thought. This was termed the rebound effect and proven by several studies over the last decades.

As I wrote in be positive, we should not beat ourselves up for mistakes. And obviously, there is also no point in trying to suppress bad habits. We should rather get good habits instead. Similar when communicating with others instead of emphasizing the negative we can try to focus on positive actions. Saying “Let’s try to make the deadline” sounds much more encouraging than saying “Don’t be late!”. Sometimes our brains are just little kids who don’t want to know the limitations but act on the opportunities.

59 Seconds – Think a Little, Change a Lot by Richard Wiseman I stumbled over this book by pure accident and almost dismissed it as one of the typical self-help books because of its title. But this book goes very systematically about debunking many self-help tales by looking at actual scientific studies.

More research on the topic of thought suppression: