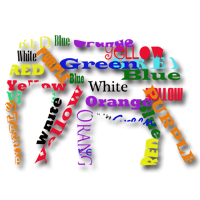 In Propagation of Truth I gave examples for of how our perceived truth can be quite different from reality. Which means, actual facts can be the morphed into generalizations, exaggerations or falsifications of a true core or just be a one-sided account of a complicated situation.

So we justly like to say that we only believe what we see. And here you may correctly interrupt and ask “What about optical illusions?” Brusspup’s Youtube channel for example is full of great examples of how our brain can be tricked into “seeing” what is not real.

And also true, at times we prefer to ignore an obvious issue because it is too inconvenient to acknowledge its existence. The elephant in the room remains intentionally ignored. But what if we focus really hard on finding one specific problem? Can it happen that we miss the bigger one, the real elephant? 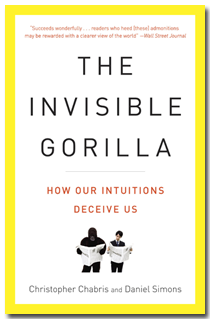 Ok maybe not elephants but how about gorillas? Maybe you have heard of the Gorilla Study, probably the most famous experiment about what is called inattentional blindness (IB).

The core of the experiment was a short video of a group of people, one half wearing white and the other half wearing black shirts. Observers were instructed ‘‘that they would be watching two teams of three players passing basketballs and that they should pay attention to either the team in white (the White Condition) or the team in black (the Black Condition)’’.

The task was to count the passes made either by the white or the black team. In a special version of the video a person dressed in a black gorilla suit walked for five seconds right through the center of the action from one side of the screen to the other. Hard to miss, right?

Well, interestingly a full 17% of observers counting the passes of the black condition did not report having seen the gorilla. BTW, the experiment was designed by Christopher Chabris and Daniel Simons, who also wrote a book “The Invisible Gorilla”. The website dedicated to the book also contains a lot of information about the authors and the experiment, including the gorilla video. I recommend watching it to understand how astonishing the outcome of the study is.

After all, this task is not easy because the players are constantly moving around. This makes our brain is so extraordinary, it filters out only the part of the visual information that is needed for the task at hand. Basically, that means only ball and shirt color are consciously registered.

Think about it for a second. Does that mean these people looked at the gorilla, but failed to notice it?

Basically, they had to look for specific white shapes within an essentially grey-scale image (think X-Ray). Reminiscent to the original gorilla study, again a gorilla, in this case an image 48 times the size of the average nodule, was inserted into the last set of images that was presented. The image was black with a white outline. NPR ran a story and posted about the study in February 2013. There, you can see an example image.

When asked “Did you see a gorilla on the final trial?” everyone of the naive and eighty-three percent of the experts answered “no”.  Since the eye movements were tracked, it could be shown that the majority of those who missed the gorilla looked directly at its location.

So people looked at the gorilla, but did not consciously notice its presence, because it was not directly part of the task.

But what if the unusual object is part of the task? 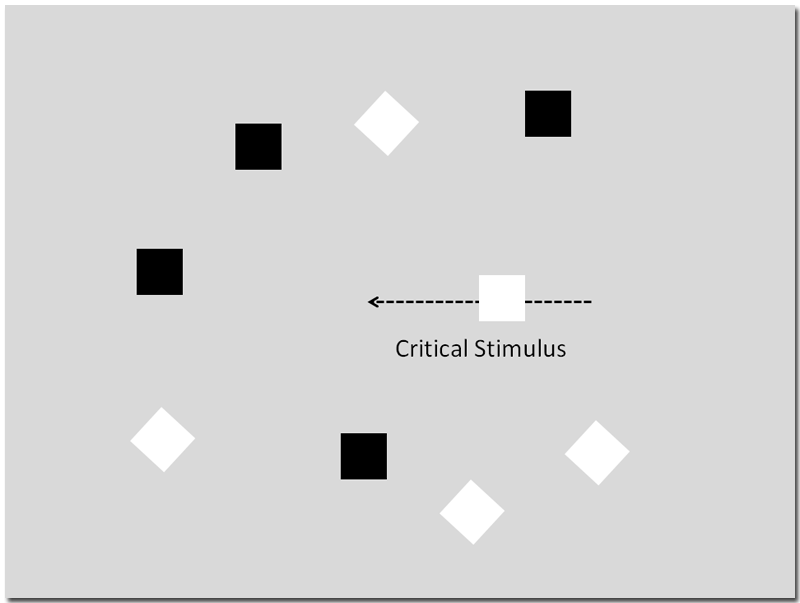 Anne M. Aimola Davies and colleagues of the University of Oxford, UK and the Australian National University found out that under certain conditions we may even miss something we were told to specifically look for.

Their study involves four black squares and four white diamonds which moved over a grey background occasionally bouncing off the edges of the screen.

The observers were asked to count bounces of individual shapes, so either of squares or diamonds in a series of trials. The colors were never mentioned. As unusual object (critical stimulus) in the fourth trial either a black or white square or cross passed for 5.5 seconds from one side to the other right through the center of the screen.

The question they were asked afterwards was: “On the last trial, did you notice anything other than the four squares and four diamonds, anything that had not been present previously?”

Based on the studies I mentioned above we would expect the observers would do well when the unusual object is the same shape, they were asked to focus on. Which is true when bounces of black squares were counted and a black square passed through the screen (noticed by 80%). However, a white square was not noticed at all (yes 0%)!

Just to summarize the two examples above: Observers had to focus on one color and failed to notice an object appearing in the other color. In this experiment color was not the primary focus, but because it was apparently easier to focus on color instead of shape the observers adapted a focus on color only.

So although observers were told to focus on squares, they were unable to notice the unexpected square.

How Does All This Relate to My Life?

Because inattentional blindness happens all the time.

Obviously, not looking where you walk is dangerous. You can probably recall the CBS News article/video Texting while Walking, Woman Falls into Fountain (no link on purpose, I think everyone has seen the video).

That having conversations while driving diverts your attention from the road undeniably makes sense as well. But  that you can focus too much on one type trigger and miss another, thus causing traffic accidents was new to me. According to this study (Feature-based attentional set as a cause of traffic accidents)  focusing on yellow street signs makes you more likely to ignore everything that is not yellow, for example a blue motorcycle that comes your way.

Good magicians don’t need to make you look the other way to perform their magic. You can be looking right at the action and miss it because they made you focus on something else in your view. This something else can be a specific object, a sound or just the expectation of something different.

We may perform the unintended magic, when giving instructions to someone, and accidentally diverting their attention to unimportant details. Have you ever been in a situation where everything was new to you and you didn’t know what to focus on?

I once got lost in a two story building. The person who gave me instructions told me to make sure not to walk the staircase up to the third floor but exit at the second. It was meant to be a joke, but overwhelmed with all the information, I was looking for the third floor, and thus was first convinced to be on the wrong staircase and then sure I entered the wrong building. Okay, I admit, I get easily lost in buildings for some reason…

This is why we should avoid don’ts if possible and be conscious about what we say when explaining complicated situations. Just keep the main message in mind when training/instructing someone and make sure we don’t go into the details too soon. Otherwise, your trainees won’t see the forest for the trees.

In our ambition to get as much done in the shortest possible amount of time we often miss the goal by being super efficient, but not very effective. This means we do a lot of work that has no effect, because we focus on the action and not the result. Extreme examples are the many cases when people are too focused on their GPS directions and end up at weird places. Sometimes it is okay to look up and listen to the voice in the back of our heads.

How often did it happen to you that you were sitting for hours on a specific problem, took a brake and solved it right when you came back? I am sure it is not only me. I often get too obsessed by wanting to solve the problem right now that I often overlook important details. Hence, it’s become my number one rule whenever I cannot immediately find a solution:

Take a break and stop solving the problem for a while.

I am pretty sure everyone has experienced these “Where are my glasses?”-“On your head” situations, where we are so focused on tracking back our steps that we look rather foolish when we realize it was for nothing. The rule above almost always works for me with problems related to electronics, assembly of IKEA furniture, software, lost items, and even with writing. Here is an another example of someone who missed the point.

Maybe you can now see what I mean with “See the Elephant – Solve the Problem” on the homepage. Focus is great, but we should always be ready to take a step back to make sure we are still on target. We don’t want to miss the important details. Focusing on Elephants not only means aiming for the big goals, but also avoiding getting lost in details by being always aware of the big picture.

Other Stories and Information