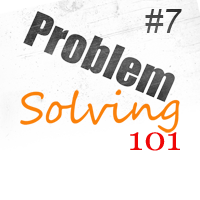 This is the magical seventh lesson of the problem solving course. You can have the best approach to problem solving, but if you fail to come up with ideas for solutions then there is not much to solve, is there? I have touched on this part before (Planning Solutions Part 1), which makes this post the unofficial Planning solutions Part–2. I, however, decided to include methods I already mentioned to make this post a more useful resource beyond this course.

The following methods are very different, because some of them originate from very different situations. As such, some will work better for your situation and some will not work at all; Some may even sound like nonsense to you. My best advice for this situation in particular, as well as in life in general, is to keep an open mind. To support this open mindset, I suppressed the urge to categorize the methods below in any way. Please also keep in mind that a thorough understanding of your problem is the foundation of the entire process. An effective problem statement can make the difference between success and failure of your problem solving process.

Originally brought about as a group method, brain storming may just work as well for individuals as a method for creating ideas as research suggests (see Resources). Regardless of the setting, the core rules of brain storming are:

This means you write down anything and everything that comes to your mind for solving a specific problem. When you compiled your suggestions, you can then evaluate, group or combine ideas.

Mind mapping is a simple technique to visualize and sort ideas in a diagram instead of writing sentences. You can describe the mind maps as tree-like structures, with a single starting point in the center that branches out, and divides again and again. Each branch ends with a word describing a concept, idea, module, etc. The lines that connect the words are part of the meaning.

The structure of mind maps supports your thinking because you immediately can see connected concepts and gaps.

Here is an example of a mind map I presented in an earlier lesson.

At the first look trial and error doesn’t deserve to be in this list, because it is not really a method for creating ideas. But is the oldest problem solving strategy we know and thus may present the last resort. It can be be superior to more sophisticated strategies in some very specific situations. For example when we don’t have any means to gather prior information or experience. This is how Edison optimized the light bulb.

Drug companies use combinatorial chemistry to find new active compounds and hackers “guess” passwords with the help of computers this way. Most computer models for all sorts of problems are based on the fact that computers can test all possible combinations until the best is found. 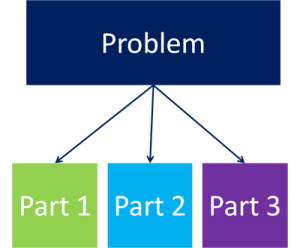 The Divide and Conquer strategy is made for complex problems. You look for smaller parts of the main problem and then solve these smaller problems one by one. Therefore, this strategy is often an ideal first step in combination with other methods. Often the solution may also present itself just by being thorough in your analytical thinking and going carefully through one step after the other.

Also, when troubleshooting any sort of process or equipment, it makes sense to find individual modules and test these individually.

For example for a broken lamp these parts would be: bulb, cables, light switch, power outlet, plug. You can now check these one by one to find the error; and when you found it, it should be easy to solve.

The same logic works for complex processes, which can be tackled in teams this way, because you can allocate the different parts among the team members.

Searching the Internet is the obvious solution for so many questions thanks to Google and Co. Which works for many common problems, however, often fails for problems that are either quite complex or very specific.

Research can mean two things a) reading/learning about the topic or b) conducting tests to gather more information. It is obvious, if you don’t want to consult a tax professional for your tax problem, then it makes sense to read tax laws (primary literature) or books written by experts on taxes (secondary literature).

What is often overlooked is that practical research is not limited to academic institutions. For example a business idea can be validated simply by asking possible customers. Research can also mean, if you are not sure which software to use, to make intensive use of free trial periods prior to making a final decision. Another example would be to get paint samples from different brands to try them out side by side in your home. If you are not sure which car to buy, you can research decision points  like MPG, safety, insurance rates, and should eventually get behind the steering wheel of actual models.

While the analytical approach dissects each component of a problem into smaller sub-problems,reduction aims to strip all irrelevant aspects of your problem (or sub-problem) until you yield a core problem, which may look very different to your original situation. This process may even result in a problem that you already solved. Usual outcomes of reduction are the rephrasing of the problem statement or the identification of layered problems.

An example I gave in another lesson would be the lack of money for certain activities, which at its core is often more a problem in prioritizing spending. For behavioral problems, reduction often means to eliminate false believes or excuses that cover the main problem.

Minimalist or intuitive design is often the answer to a problem that has been reduced to its core.

Abstraction is basically the process of transferring a concrete (real) concept into an abstract (theoretical) one. For example when converting real-life problems into math problems.

As in “Can I bake 20 cupcakes with the ingredients I have?”. It may sound trivial, but proper math isn’t that simple for example when dealing with expectations based on exponential growth.

A blueprint is the abstract version of a house, which can be used to evaluate space issues.

Looking for analogous problems that have already been solved elsewhere is a very successful strategy. Just think about all the designs that have been borrowed from nature (Biomimicry), like Velcro, self-cleaning paint, the bullet train, etc.

This is not an argument for posting party-pics on Instagramm, pinning cake recipes on Pinterest, or re-tweeting the the hundredth best motivational quote of the day on Twitter; a real network of knowledgeable and useful people can be the best means to a solution.
Someone in your network my be the expert you need or know one to recommend you. She may have solved a similar problem or know of people in another field who’ve been successful in solving an analogous one. In short a good, i.e. active network of people can be an exponential representation of your own efforts.

The Root Cause Analysis (RCA) is typically applied for situations in which a harmful outcome has occurred or an unwanted state was reached, when the goal is to avoid these situations in the future. While such situations very similar to typical troubleshooting cases when it is sought to return to a previously functioning state or process. RCA can indeed be used to troubleshoot, however route cause analysis may often lead to an improved, better state or process.

The primary goal of a root cause analysis is to identify the factors that resulted in the occurrence of the harmful occurrence of one or more past events in order to identify what needs to be changed to prevent recurrence.

A simple example would be analyzing why a client was unhappy and what can be done (”lessons learned”) to avoid such a situation from happening again.

The root cause analysis is a systematic investigation, with conclusions and root causes that are identified supported by documented proof. As for any thorough investigation the analysis has do be conducted as analytically and objectively as possible. It is beneficial to establish a sequence or timeline of events to understand at which point the path towards the unwanted occurrence began. This will usually result in a list of factors (actions, inactions, conditions, etc.) that can be sorted by time of occurrence. Part of the solution is to eliminate the first event and to evaluate what could be done differently and how the elimination of this event would affect the possible occurrence of following events.
Without a thorough RCA often a trigger of an unwanted event, which occurred long after the actual causes, is identified as the culprit of the problem. Avoiding the triggers will likely only result in recurrence.

I’ve given such an example in the last lesson (the black TV).

Another way to find solutions is to conduct a thought experiment. You think about the best possible solution regardless of any limitations. A solution that would exist in an universe you created. Based on that ideal picture you can then decide whether there are other problems involved, if your problem still exists or if you need to change your ideal solution.

Example: Thinking about flying cars to solve current traffic problems. Besides building flying cars other questions could be for example whether to limit traffic above the ground to horizontal or vertical lanes, how it would influence current airplane traffic, if new traffic rules where needed, etc.

Real life examples that became actual solutions where originally utopias like “My ideal gadget has only one button (-> the iPod)”, “I can carry my music with me (-> the Walk Man)”, “I can fly” (-> the airplane), etc.

In some specific cases it may be useful to think about achieving the opposite of what we want to achieve. Thinking about how to ruin a family event as quickly as possible may help realizing how inappropriate reciting your bothers most embarrassing childhood memories may be.

Many stories of how great people derived their greatest ideas don’t tell about desks, pens or paper. They are stories of sudden epiphanies in moments of distraction. Think about Archimedes in his bathtub or Newton and the apple, just to mention the most famous ones.
I wrote before, how taking a break often helps me in many situations regain focus on important details.

Sure, we often thrive under pressure, but it may often just need the opposite – a small break – to come up with the right idea. As counterintuitive it seems there is plenty of scientific evidence that it works.

Whether the unconscious mind is indeed at work is not entirely clear. The research on incubation offers various explanations for this phenomenon. But regardless of the mechanism, when a problem seems difficult and you have already put quite some thought into it, taking a break is a viable strategy to see things more clearly. I think it is worth keeping that in mind.

If you don’t want to dig though a lot of complicated research, then I can recommend the Book
Yes!: 50 Scientifically Proven Ways to Be Persuasive by by Noah J. Goldstein, Steve J. Martin, and Robert B. Cialdini.

There are plenty more, these are some I have looked into before I got a good deal on Xmind and stuck with it.

I also need to mention Scapple, which is not really a mind mapping tool, but currently my favorite way to visualize and sort information. It’s form the creators of Scrivener my favorite writing tool. This post was created using Scrivener and multimarkdown.