Problem Solving – The Big Why 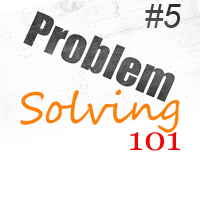 After a couple of weeks, I am finally back with another lesson of my problem solving course. I hope you don’t still wonder “Why problem solving?”, but if you do, then it is more than time to eliminate these doubts.

Let me start with the following statement:
Happy and successful people are mostly good at solving problems.

These solved problems are both their own and other people’s problems. What do you think about that? You may not work in service, but unless you are living in solitude under a rock, in which case I applaud you to your internet connection, you will have some contact with other people. Any form of contact counts, phone, email, tweets, anything. People have problems, and there are different ways to deal with these problems.

John Gray writes in his book “Men Are from Mars, Women Are from Venus” that communication between men and women is so difficult because while women are basically just chatting, men are looking for a problem that they have to solve. Hence, when she talks about her day at the mall and the many nice things she saw, she is mainly interested in sharing her day with him, while he sees all the unfulfilled wishes he wants to satisfy and is pretty stressed out about that, what makes him such an impatient listener. This may be true or not, but for sure being able to fulfill each others wishes makes both partners happy, doesn’t it?
She telling him about the song that made her think there was something wrong with the car, makes him immediately visualizing where the problem could be even before she’s done with her story. Although I think the dynamics of conversations are pretty often like this, I don’t believe these behaviors are limited to one gender or the other. I think it is more about personality types. Not every private chat evolves around a problem, but understanding the pain and being ready to help when needed is probably not the worst behavior.

Contrary, business is in my opinion about nothing else than problems. Businesses exist only because they solve at least one particular problem.

As a result, conversations with clients should always be aimed at solving the client’s problem, no matter how innocent it may start out. When clients call, asking why the report is not completed, the TV doesn’t work; the car still makes funny noises; the order is not yet delivered, then they don’t want to hear excuses or through how many hoops the other person has to jump to make it work. She primarily wants to hear when her problem is going to be fixed.

When the client just calls to see “where things are at”, it doesn’t mean he just wants to chat about the playoffs, he wants to know before the call ends that and when his problem is going to be solved.

Someone entering a store has at least one minimum problem to be solved; otherwise he or she wouldn’t have entered the store. This minimum problem is boredom. And so even the typical ‘just browsing’ customer has two maximum prices in mind he or she is willing to pay. One for the ideal product and one for a minimal acceptable product. Often we end up buying the latter just because it was affordable. Admit it, how often have you bought something just because the sales people took such good care of you or something was such a good deal? The purchase solved a problem for you, even if was just short term.

Can you see how it is all connected? As I wrote before, for a problem to be considered solved, the solution has to meet either your optimal outcome or at least your minimal acceptable result (MAR). In sales, a solved problem for the customer means he/she makes the purchase.

I truly believe, that when we start thinking as problems solvers, our why for certain actions begins to shift automatically from a self centered to a more purpose driven position. We as humans have a need to help and so we feel great satisfaction when we are successful in helping others. Consequently, we are more successful and happy with what we do when we acknowledge that we are solving someone’s problem(s).

We like to solve problems and we are eager to get our own problems solved. That is why we are so happy to get confirmation and status updates when we ordered something online. Because we know somebody is taking care of our need and everything goes according to a plan. Switching sites again, it makes therefore quite some impact if we answer questions like “What and when” to customers frequently and unasked, for example as part of regular status updates.

Hi Barry,
Thanks for the calendars. They make our coffee kitchen look nice. I didn’t know this was possible.

BTW, just wanted to let you know we officially reached phase 2 of the project. This week we will hire the new assistant and start planning the conference in April. We are one week behind, but should be able to make it up within the next three weeks with the help of the assistant. Hence, no change of the final delivery date.

I’d like to give you another real live example. I know one person who is absolutely not a habitual problem solver. Let’s call her Marry (not her real name). As the property manager of a rental unit I am renting we communicate from time to time, mostly via email. She is the type of person who responds to my emails at 11 PM telling me that she is at home right now and won’t be able to look into the matter before tomorrow. The next morning she is stressed out because she answered emails until late. It think it is needless to say, she mostly misses the mark in her responses to my questions because of that.

Here is one email she has sent a few days ago: 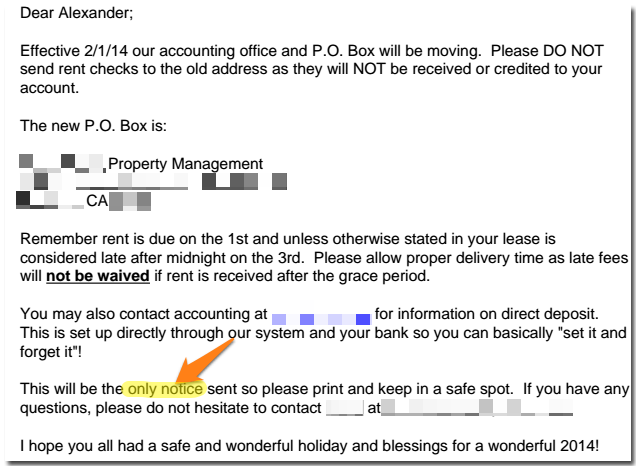 I was not really affected or bothered by the email, because I use auto payment, but it is a good example of someone not thinking about solving their clients’ problems. Of course fees for late payment will not be waived, which is why there is only one notice about the change of address for the checks. To her benefit I don’t assume mean intentions and just blame poor problem solving skills. If she had spend two seconds thinking about possible problems she would have seen the chance of someone missing her email and ending up with a late fee just because of that. How does one get happy clients for life, right? People can be on vacation, accidentally overlook or delete emails. Sending another email two weeks after the first one, would increase the chances of everyone getting it tremendously. One more email could limit the number of the several other emails she has to send to let her clients know their checks have not arrived. With less emails to send she would have more time to solve real problems. But that is not the focus of her work, which is administration.

I could easily start into a rant about administration in general and how bureaucracy mostly solves self generated problems. But I won’t. I want to take it down to each one of us, because we are often not better. When we don’t prioritize on solving problems, we easily end up doing tasks that have no meaning at the time we are doing them.

This is not the typical *“don’t watch TV, don’t drink coffee, don’t spend time on Twitter, Facebook or YouTube” or whatever is considered a waste of time. If your problem is that you need some fun and the reason why you watch YouTube is because you want to relax, then it is perfectly fine doing so even on a busy day, because you do it consciously. You are solving a problem. When you can get back after that and solve other important problems with more focus then why not? When you want to watch TV to relax, but are busy answering emails on your smartphone at the same time, then you are wasting time. Then you are obviously not solving the problem you wanted to solve.

It is that simple: We are most happy when we solve problems and we are not when we fail at it. Therefore an easy way to be more content with or lives is to simply do things consciously; even when it is “wasting time” as long as it solves a problem.

I hope you see why I think problem solving is a part of life and so important to be embraced consciously.